Blaqstar - Shake It To The Ground

Posted in Art Cards, Electro, Fashion, Partying All The Time, Remixes | Only 1 person has something to say about this » 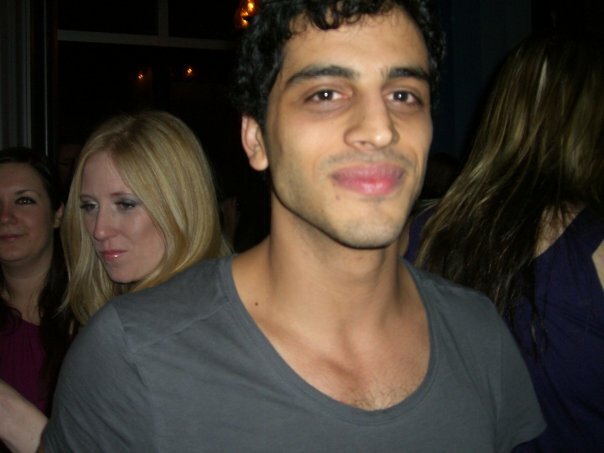 Well, actually you can. But this one of him from a few weeks ago is pretty good.

The Birthday Girl (behind him) also looks pretty good.

Anyways, here are some tracks from that night:

Posted in Electro, Partying All The Time, Toronto | Comment here » If you’ve been reading Nineteen Ninety Never for a while, you’ll know that I totally dig zombies and sci-fi. These two tracks remind me of both, and that’s why they’re bang-on.

Tits and Clits - Attack of the Living Dead

Props to Oh Crapp! for the Hot Chip remix and to the Data Sapiens for the other track.

For more Zombie related tracks, check out the post I wrote a few months ago about World War Z. From a series of Halloween photos is my own costume, the Roman Empire’s favorite emperor Gaius Julius Caesar.

My original idea was to go as historically-accurate Caesar (with 23 bloody stab wounds) and have Claudio go as Brutus, but he wasn’t into it.

The Streets - Turn The Page

That track is epic, and I get shivers every time I hear it.

For more pictures from what was an equally epic Hallowee, check out what the Manni boys dressed up as.

Alright, so I know that All Hallow’s Eve was a few weeks ago but I’ve finally gotten around to sorting out my pictures from then. First up is this picture of Claudio Manni and his brother Toni Pepperoni. They went as each other, and won first place in the costume contest at the party we went to. I’m pretty sure that I drank the two bottles of wine that were their prize but that’s okay. Claudio (on the right) was the only one of the two who put any effort into his costume.

(keep on listening, because after about the seven minute mark there is an entire other song. Back in the day, we used to call it a “secret song.” Now I just call it me being too lazy to remove it.)

Tiga is on MySpace here and you can buy his tracks on iTunes here.

Posted in Electro, Fashion, Partying All The Time | Only 1 person has something to say about this » I don’t really know if Mirror’s Edge is actually a French game, but since it is based on that parkour stuff it has a certain “je ne sais quois” of coolness about it. More props to it for rocking a cyberpunk storyline.

Pop The Glock is the first Uffie song that I ever heard, and the video below from Mirror’s Edge reminded of it.

Apparently the game went gold within a week of being launched.

Crystal From The Persian

The Persian Prince sent me this Crystal Castles track a little while ago, but he emailed it to an address that I rarely check anymore.

Here is another song for the blog. It is a remix with The Little Ones by Crystal Castles. Crystal castles are on most blogs, but this is reasonable obscure (and is a dope remix NOT from palmsout).  More indie rock and less indie electronic, but it still has video game-esque sounds…

I”ll send a write up shortly….

You know, he never did send me that write up.

Check out this wicked vid about Hip-Hop in the former communist East Germany (via Hurt You Bad) then listen to Li’l Kim “put it down in German” by covering Biggie’s Hypnotize with some German fella at her side.

“My first diary notes ‘84: I am really making progress doing the electric boogie.”

You cannot make that shit up. Nor can you make up the name for themselves: Automatic Freaszy Crew. Even they admit that ‘freaszy’ isn’t a word.

Expect to see it a lot in upcoming posts from 199X.

Posted in Hip-hop, Partying All The Time, Video | Comment here » Check out The Vintage Skeltons to see more of his work. Apparentally, his EP, titled Vertebrae, is also available for download.

Further props to the Skeletons for the Ghost in the Shell image in their MySpace album.