Stars, By Way Of Revenge 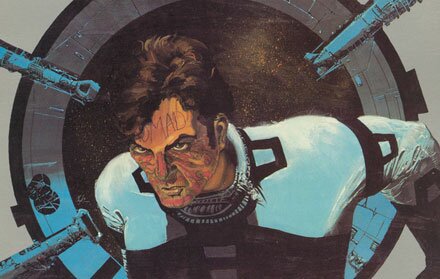 Oh man - I just finished reading Alfred Bester’s The Stars My Destination and it is intense. The book was written in 1956, but is decades ahead of its time and reads like an ultra-violent modern thriller. It keeps up a frantic pace for all 300 pages, and you’re never sure if you should be sympathizing with the main character and cheering him on in his quest for justice or hating him for the atrocities he commits.

If you get a chance, pick this book up. I mean, just look at the main characters in the book:

Gulliver “Gully” Foyle - the almost-unlikable protagonist. He survives months shipwrecked in deep space, has his face tattooed with tiger stripes and the word “Nomad” and spends the entire book on a murderous quest for revenge against those he feels have wronged him.

Sol Dagenham - The fast-talking head of an interstellar courier organization/private detective agency, a war-time accident left him so radioactive that he isn’t legally allowed to be in the same room as anyone for more than 30 minutes.

Olivia Presteign - Heiress to the Presteign fortune, albino and able to see only in the infrared spectrum. Gully’s hidden tattoos are visible to her, as are the warring ships in orbit around earth.

Jiz McQueen - The unfortunately-named beauty that helps Gully escape from a prison deep within the mountains of France, she seems more of a throw-away character

Robin Wednesbury - A broadcast-only telepath who promises to help Gully in his quest for revenge only so she can find out what happened to her own missing family.

Y’ang-Yeovil - Master of disguise, Asian stereotype and a big shot in the earth’s intelligence agency, he is tasked with putting a stop to Gully’s rampage.

Add to this zany cast of characters the fact that everyone in this future is able to teleport at will distances of about 15 kilometers (they call it “Jaunting”), and you’ve got one hell of a piece of science-fiction.

Try and not think too hard about it while you listen to Owl Vision’s Fields of Corpses - its a track as angry and intense as Gully Foyle. I don’t much about Die Antwoord, but I’m throwing another of their tracks up here because Ninja is at least as driven and tattooed as Gully.

There’s more Die Antwoord on 199X here and here, and you should also check out Owl Vision’s website.

This entry was posted on Tuesday, March 16th, 2010 at 5:28 pm and is filed under Electro, Ninjas, Sci-Fi. You can follow any responses to this entry through the RSS 2.0 feed. You can leave a response, or trackback from your own site.

2 Responses to “Stars, By Way Of Revenge”