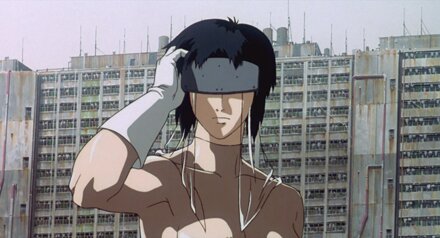 Near the middle, the main characters, Case and Molly, end up on an orbital colony that had been populated by a group of reggae-loving welders. Case is a hacker, Molly his cyborg captor/guardian angel.

The two surviving Founders of Zion were old men, old with
the accelerated aging that overtakes men who spend too many
years outside the embrace of gravity. Their brown legs, brittle
with calcium loss, looked fragile in the harsh glare of reflected
sunlight. They floated in the center of a painted jungle of
rainbow foliage, a lurid communal mural that completely cov-
ered the hull of the spherical chamber. The air was thick with
resinous smoke.
`Steppin’~ Razor,’ one said, as Molly drifted into the cham-
ber. `Like unto a whippin’~ stick.’
`That is a story we have, sister,’ said the other, `a religion
story. We are glad you’ve come with Maelcum.’
`How come you don’t talk the patois?’ Molly asked.
`I came from Los Angeles,’ the old man said. His dread-
locks were like a matted tree with branches the color of steel
wool. `Long time ago, up the gravity well and out of Babylon.
To lead the Tribes home. Now my brother likens you to Step-
pin’~ Razor.’
Molly extended her right hand and the blades flashed in the
smoky air.
The other Founder laughed, his head thrown back. `Soon
come, the Final Days… Voices. Voices cryin’~ inna wilder-
ness, prophesyin’~ ruin unto Babylon…’
`Voices.’ The Founder from Los Angeles was staring at
Case. `We monitor many frequencies. We listen always. Came
a voice, out of the babel of tongues, speaking to us. It played
us a mighty dub.’

Death In Vegas - Twist and Crawl

I know more about cyberpunk than anything dub- or reggae-related, so I could be totally off on what I think space dub would sound like. The Persian Prince says that dub is “an off-shoot of reggae that involves remixing or revising existing songs into instrumental or mostly instrumental versions by increasing the low-end and removing all or most of the vocals.”

Either way, I’ve been playing a lot of Halo 3 with Claudio lately and my next life goal is to get the Steppin’ Razor achievement.  Suitably named, it involves getting a triple-kill with the energy sword in a ranked multiplayer match.

I used that picture of Motoko Kusanagi from Ghost In The Shell because if anyone is Cybernetic Steppin’ Razor, it’s Motoko. File this post under Ninjas as well, because you just know Steppin’ Razor is just rasta slang for ninja.

You can read the full text of Neuromancer here or buy it from Amazon here.

Then check out Thievery Corporation and Death in Vegas

This entry was posted on Wednesday, January 14th, 2009 at 7:11 pm and is filed under Electro, Ninjas, Sci-Fi. You can follow any responses to this entry through the RSS 2.0 feed. You can leave a response, or trackback from your own site.