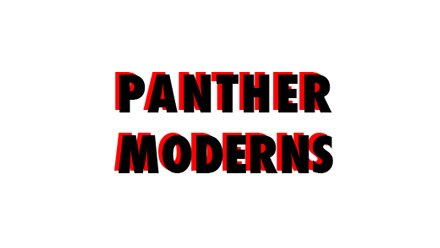 The Panther Moderns were a sort of youth terrorism organization in the book Neuromancer by William Gibson:

“Panther Moderns,” he said to the Hosaka, removing the trodes. “Five minute precis.”

It wasn’t a name he knew. Something new, something that had come in since he’d
been in Chiba. Fads swept the youth of the Sprawl at the speed of light; entire subcultures
could rise overnight, thrive for a dozen weeks, and then vanish utterly. “Go,” he said. The
Hosaka had accessed its array of libraries, journals, and news services.

The precis began with a long hold on a color still that Case at first assumed was a
collage of some kind, a boy’s face snipped from another image and glued to a photograph
of a paint-scrawled wall. Dark eyes, epicanthic folds obviously the result of surgery, an
angry dusting of acne across pale narrow cheeks. The Hosaka released the freeze; the boy
moved, flowing with the sinister grace of a mime pretending to be a jungle predator. His
body was nearly invisible, an abstract pattern approximating the scribbled brickwork
sliding smoothly across his tight one piece. Mimetic polycarbon.

Cut to Dr. Virginia Rambali, Sociology, NYU, her name, faculty, and school pulsing
across the screen in pink alphanumerics.

“Given their penchant for these random acts of surreal violence,” someone said, “it

phenomenon isn’t a form of terrorism.”

Dr.  Rambali  smiled.  “There is always  a point  at  which the terrorist  ceases  to
manipulate the media gestalt. A point at which the violence may well escalate, but beyond
which the terrorist has become symptomatic of the media gestalt itself. Terrorism as we
ordinarily understand it is inately media-related. The Panther Moderns differ from other
terrorists precisely in their degree of self-consciousness, in their awareness of the extent
to which media divorce the act of terrorism from the original sociopolitical intent….”

In the book, the “random acts of surreal violence” described above take the form of the Panther Moderns facilitating a raid on an office building by hacking into the building’s computer network to basically hypnotize everyone inside into thinking they’ve been poisoned. At the same time, some of the Moderns called the police to tell them that:

“an obscure sub sect of militant Christian fundamentalists had just taken credit for having introduced clinical levels of an outlawed psychoactive agent known as Blue Nine into the ventilation system of the Sense/Net Pyramid. Blue Nine, known in California as Grievous Angel, had been shown to produce acute paranoia and homicidal psychosis in eighty-five percent of experimental subjects.”

Throughout the raid, the Panther Moderns refer to themselves as ‘Brood’ and another character as Cat Mother.

Since Neuromancer is pretty 80s, here are some synthed-out tracks to get you thinking about the original cyberpunks:

(get more music from TEEN on her Myspace)

Part of me wants to think that those tracks are what the Panther Moderns would be jamming to if they were actually around today. A bigger part of me knows that they’d probably be fucking around on 4chan instead.

If you like this playlist, you might also like the Space Dub playlist I put together (smiliarly inspired by Neuromancer), or the mix I think Thanos would have given Death.

This entry was posted on Wednesday, May 12th, 2010 at 10:41 am and is filed under Electro, Fashion, Ninjas, Partying All The Time, Sci-Fi. You can follow any responses to this entry through the RSS 2.0 feed. You can leave a response, or trackback from your own site.