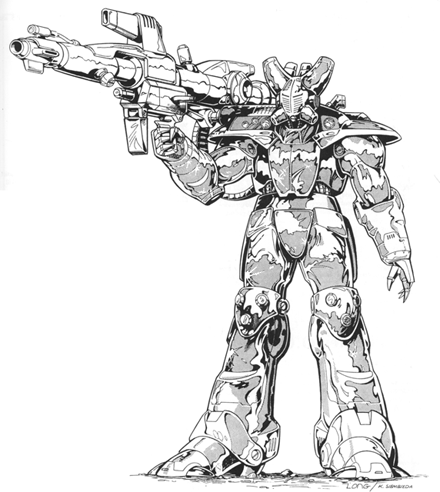 I’ve been doing a bit of reading about the old RIFTS roleplaying game, and it sounds like Glitter Boy is pretty much the most bad-ass mech around. They’re made out of reflective armor so that beam-weapons can’t hurt them, and they carry around shoulder-mounted rail-guns. You wouldn’t want to mess with that.

Just as a bright, shiny mech like that would stand out on the post-apocalyptic battlefield, Kanye West stands out on the hip-hop war zone of the early 21st Century. I guess you could say he’s the Glitter Boy of rap.

Kanye West and Clipse - Kinda Like a Big Deal

For other Kanye news, recent articles that talk about 50 Cent referring to Kanye as “try-sexual” are pretty hilarious. And speaking of Glitter Boys, it sounds like 50 spent over $60,000 on his teeth.

This entry was posted on Saturday, May 9th, 2009 at 12:40 pm and is filed under Hip-hop, Remixes, Sci-Fi. You can follow any responses to this entry through the RSS 2.0 feed. You can leave a response, or trackback from your own site.